What is a heat network?
Proposed regime
Proposed regulator
The framework
Rights and powers of regulated entities
Enforcement powers
Comment

On 6 February 2020, the Department for Business, Energy & Industrial Strategy (BEIS) launched its consultation titled "Heat Networks – Building a Market Framework" alongside its report headed "International heat networks: market frameworks review". The consultation is seeking views on various proposed policy options for the development of a heat networks regulatory framework. To this end, the government is proposing significant legislative changes in order to establish a progressive regulatory system that promotes confidence for investors while also giving heat network developers equivalent statutory rights and undertakings as gas and electricity utilities through a mix of general authorisation and an additional licencing system again, to bolster confidence in the industry.

As heating currently accounts for more than a third of the greenhouse gas emissions emitted in the UK, and with the Government having introduced a legally binding target to achieve net-zero carbon by 2050, it is clear that the heat industry will be required to undergo a significant transformation and decarbonisation to meet this aim. The Government expects the currently unregulated heat networks sector to assist in meeting this target and further, with the Committee on Climate Change estimating that at least 18% of UK heat will have to come from heat network systems. It therefore consider that this sector will require a regulatory system to be introduced.

The overriding goal of the consultation is to set out the preferred approach of the Government in regulating heat network systems, while seeking the views of industry stakeholders on the proposed system of regulation.

What is a heat network?

Heat networks are ways of delivering heat from a centralised generation source to a number of end consumers through a network underground insulated pipes which carry hot water. The single central heating source omits the need for boilers in each individual consumer's residence and therefore increases efficiency across the area covered therefore reducing carbon emissions. 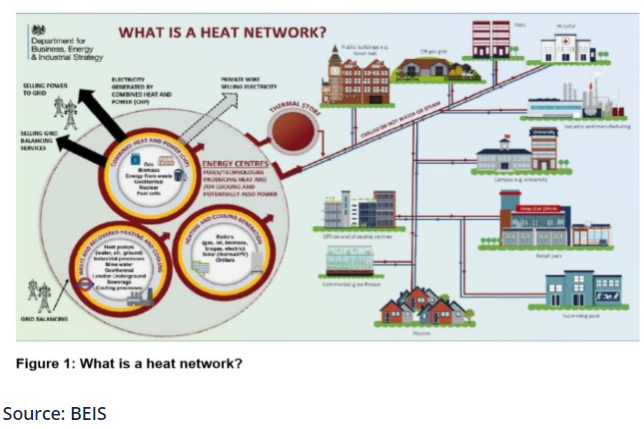 Due to the significantly fragmented nature of heat network schemes across the UK[1], BEIS is proposing an outcome-based approach, whereby heat network supply firms will be assessed on their ability to deliver these certain outcomes, as opposed to adhering to prescriptive rules. This approach, it is suggested, will ensure that both current and future developments are accommodated within the regulatory framework.

The consultation also seeks views on whether the Office of Gas and Electricity Markets (Ofgem) would be the appropriate body to take on the role of regulator. Alternatively, an entirely new regulatory body could be established. As Ofgem is the current regulator for the gas and electricity markets, both the Competition and Markets Authority (CMA) and BEIS agree that it would be best placed to undertake the role of heat networks regulator. Notwithstanding the fact that the heat networks market considerably differs to that of gas and electricity, Ofgem has a proven record of developing and enforcing consumer protection measures and, according to BEIS, would likely be best placed to regulate heat network systems.

The consultation envisages that the proposed regulator would be responsible for protecting the interests of current and future consumers in relation to heating and cooling generated through heat networks. Importantly, the framework will apply to domestic customers and micro-businesses but not to non-domestic consumers.

The alternative, establishing a new regulatory body, may be more costly and take longer to become operational. However, given that BEIS has considered whether additional regulators are needed more generally, such as for Carbon Capture Usage and Storage (CCUS). (as we further reported here). It may therefore be an opportunity, should the government wish to do so, for a wider review of regulators in the UK market.

The consultation is seeking views on whether heat network regulation should be by:

As with gas and electricity supply, the licencing regulatory model would require any entity wishing to undertake 'regulated activities' to obtain a licence from the regulator, before they can provide any heat network services to consumers. The licence holder would be required to ensure their consumers were protected, with the licence specifying what exactly was required of the licence holder.

The regulatory framework would also include provisions to ensure that all customers receive high quality service and there is fairer pricing on the heat networks. Both BEIS and the CMA have highlighted pricing transparency as a key issue for the regulatory framework to address, and suggest that "a sector regulator should require all heat networks to comply with 'principles-based' rules or guidance on pricing". To this end, BEIS is consulting on whether the proposed regulator should have the powers to mandate and force suppliers to publicly disclose their fixed charges, tariffs and unit rates while providing clear explanations of how prices are calculated for consumers. This, (as will be discussed further below) is subject to the caveat that any intervention on the part of the regulator will be proportionate and the crucially the least possible burdens will be placed on the heat network supplier.

Alternatively, the general authorisation model would allow operators to deliver specific services provided that they meet a set of regulator-set conditions and requirements. The rationale for adopting an authorisation model is to ensure a consistent approach to all suppliers within providing the same class of service while removing the upfront costs of applying for a licence thus facilitating market entry.

BEIS proposes the option of adopting the general authorisation regime for all heat network systems with additional aspects of licencing. This would mean placing a duty on heat network suppliers to notify the regulator of their operation rather than having to apply for a licence and then to be assessed for suitability. This may be less onerous on both the regulator and the supplier and allow for greater flexibility to adapt to alterations or new innovations on the heat network system.

Rights and powers of regulated entities

The consultation seeks views on whether the rights and powers currently afforded to "statutory undertakers" should also be extended to heat network suppliers. According to the consultation, the lack of statutory powers can severely restrict market growth and investment, and further, may frustrate heat network operators efforts to rectify any equipment failures (such as where they are required to access underground piping).

The consultation suggests that the proposed regulator should also have enforcement powers to ensure adherence to the regulatory framework. These would be analogous to those in the electricity and gas markets and would include:

The authorisation regime will require the adoption of different enforcement techniques to ensure that customers are not negatively affected by the lighter touch approach. BEIS suggests that greater use of customer complaints could be used to determine whether a breach of requirements has taken place.

The fines that the regulator levies are expected to be proportionate to the scale of the heat network. Where fines are levied, the consultation proposes that the payments could be redistributed to consumers and any in excess of the level of consumer detriment be passed back to the Government. However, the consultation also considers making the controlling parent company (who may operate several heat networks across the country) liable for the fines as an additional deterrent.

The regulator would also have powers to revoke an operator's licence for the failing network, or, in case more serious failings, for all networks. While this is akin to rights Ofgem has in the gas and electricity sector what constitutes a serious failing may need to be better defined for the heat networks.

The deadline for responses to the consultation is 1 May 2020. However, it is expected that a further consultation will take place later in 2020 after the long anticipated Energy White Paper has been published, (still expected in the first quarter of 2020) which may advance some of the government's thinking on these issues.

The outcome of the consultation remains an area of great interest for the UK's future development of low carbon heating. As the consultation sets out, there are a number of options, views and suggestions for the regulation of heat network systems. It is clear that from a commercial perspective BEIS is seeking to promote both industry growth and investor confidence in heat network systems. The proposed light touch regulatory system appears to be aiming to give heat network operators flexibility and certainty as to future developments within the sector. Undoubtedly, heat networks will play a critical role in aiding UK's transition to net zero by 2050 however, there remains the question of whether this approach appropriately caters for other fully carbon free emerging technologies, such as hydrogen fuelled heating and renewable heat pumps.

The materials contained on this website are for general information purposes only and are subject to the disclaimer.

ILO is a premium online legal update service for major companies and law firms worldwide. In-house corporate counsel and other users of legal services, as well as law firm partners, qualify for a free subscription.

Register now for your free newsletter

More from this firm